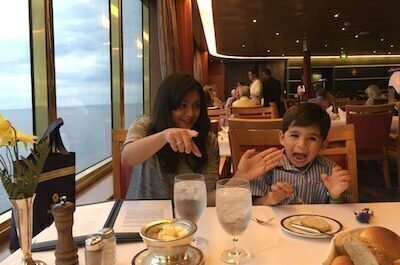 M/S Veendam is a medium sized ship weighing about 58,000 tons.
The trend these days is for larger, ( and even larger) ships. Think 5000 passenger with amenities and entertainment options which rival, even exceed 5 star resorts. ( Don\’t be surprised to find, surf simulators, multi deck water slides and Broadway adaptions).
If a “large”ship experience is what you are looking for, then this ship is not for you. Holland America celebrates the original sea faring traditions with a classic cruising experience. Think large very comfortable rooms (even for base category, interior rooms), fine dining, and exceptional service. It’s not that the newer bells and whistles are not there. We enjoyed the evening entertainment, the casino and the kids play areas. The organised activities are varied, from wine tasting, lobster cooking classes, poker competitions, cup cake and tea ceremonies. They however do not “define” the ship and you will get better elsewhere.

The food is very good and they take a lot of effort to vary it. For all the 3 meals, you have the option of a proper sit down course or buffet. For an extra charge you can eat at the Italian restaurant (Canaletto, USD 10) or the steakhouse ( Pinnacle Grill, USD 23). Once in the sailing you have option to have food at the Le cirque restraurant, the award winning New York restaurant. (USD 43). We thought of having a meal here. However menu looked uninspiring and didn’t motivate us to loosen the wallet!
The best buffet option was the breakfast buffet, having multiple live counters including a egg florentine section and waffle counters. I have always maintained that the best indicator a ship’s food standard is the omelette counter (it was excellent!). A good breakfast buffet will have small things like separate counter for fried eggs and omelettes. (this ship had it) I found the lunch and dinner buffet to above average and nothing exceptional. This included the burger and pizza counters. They did however take care to vary the menu. Additionally you had speciality nights, where they focussed on dishes from various countries. The real variation came in the late night Snack Counters where you had a new country’s cuisines (Chinese,Thai , Californian, French, German and so on) everyday. The options were Interesting, the food though wasn’t brilliant at these late night counters.
The sit down dinners were however excellent! It was comparable if not better than an expensive New York restaurant. Consisting of a four course meal, you had to pick items from a menu card. The options were varied and interesting. Surprisingly the vegetarian options were more than adequate. This is not a ship where a vegetarian will go hungry!
Options for Kids
My focus was on my 3 year old kid and I had heard horror stories about Holland America being unfriendly towards children. I had also heard that nearly everybody who travels HAL is above 70 years! The cruise gave me a positive surprise. Make no mistake Holland America and M/S Veendam is not by any measure the pinnacle of kids entertainment on the high sea.The kids club was however well stocked with excellent educators. My 3 year old was engaged, with activities like cake making, pyjama parties, story book reading. The downside was there not enough age segration. ( same educators and activity for 3-7 years). My 3 year old did feel a left out in a sea of 5 and 6 year olds. There were about 20 younger kids ( infant to 7) and 20 more older children on this sailing

Service:
The other standout are the excellent staff who was very friendly and made a special effort to “bond” with my infant. Service on this ship was a standout and actually flawless ( and I am comparing with expensive 5 star hotels). 10 out of 10

Itinerary:
We took the Canada and New England cruise starting from Vancouver. The ports were Vancouver, Quebec, Halifax, Prince Edward Island, Sydney ( Nova Scotia), Bar Harbour ( Maine) and Boston. We found the itinerary excellent as it allowed us to do locations which are difficult to do my land. Also most of the places were one day itineraries, so you didn’t feel that you have “missed” anything. The Eastern part of the Canada is extremely interesting due to its French culture, both in terms of Architectural influences, language, food and the general vibe. In additional locations like prince Edward island and Halifax gave an excellent idea about Atlantic Coast island and Ports.

Highlights:
a) The most delicious lobster you can taste and a price which is 1/10 of that in a big city restaurant
b) Quebec. You would be hard pressed to believe that this was a place in Nort America and not a coastal town in place. Wonderful vibe and 95% of the population speak only French
c) Bar Harbour : One of the cutest fishing towns / villages you will ever go to. The Arcadia national park is a highlight
d) Montreal and Quebec : Beautiful small cities. Cosmopolitan, relaxed and picture perfect.

So should you do this cruise?
Yes, especially if you want to want to see Canada and New England in a non complicated way

Should you do this cruise with your kids?
The answer is yes and a no. The experience will be adequate. However given the limited nature of Kids activities and Kid centric facilities, you will find better