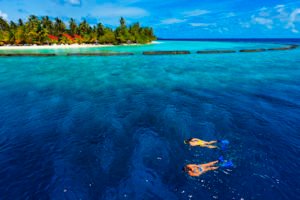 How to Find Best Deal in Maldives in the Winter Here are a few tips to find the best deal in the Maldives:

October to March is the busy season in the Maldives. The normal Discounts and Offers are difficult to find, especially over the critical Christmas and New Year dates

A ) Special rates for the Indian market.

B) Avoid the “super” peak period.

Different hotels have a different definition for Super peak dates. For some, it starts from 15th of December going up to 31st January, while others have a very short or no super peak dates ( 24th December to 2nd January or only special meal supplements on Christmas and New year)

Sea Plane transfers are 300-600 USD more expensive per person as compared to hotels with Speed boat transfers (which are in turn closer to the airport)
In case you have to go for a resort which requires seaplane transfers opt instead for a domestic flight plus speed boat combo. This will be USD 200-400 per person cheaper. E) Scout for hotels which give free nights

Meal plans offer poor value as compared to ordering food a-la-carte, in most properties. In almost all cases, you will end up saving money by ordering on the spot. The other option is the all-inclusive resorts ( Club Med, Lily resort, Aadaran Hudhurunfushi), which bundle alcohol and activities along with meals.

G) Ensure you get the honeymoon/anniversary freebies

Nearly all hotels give extra for honeymooners and anniversaries. Don’t miss out on them!